This article discusses the findings in the scientific paper 'Determinants of emissions pathways in the coupled climate–social system', written by Frances C. Moore et al. and can be found here.

What are climate models?

Climate models use mathematical equations to represent the significant climate system components: atmosphere, land surface, ocean, and sea ice. The models simulate the interaction of different climate factors, and are used to project future climate events. The IPCC, the Intergovernmental Panel on Climate Change, is a United Nations body that uses climate models to study climate change and explore potential solutions. This helps us to understand what the future might look like if, for example, we continue to emit at our current rate, or we get to a net-zero state by 2050. Ultimately, climate models do their best to demystify future uncertainties in the face of anthropogenic climate change.

However, climate models generally rely solely on quantitative data. They do not include the qualitative sociopolitical variables that determine climate policy and, therefore, miss out key elements that contribute to these emission trajectories.

Sociopolitical variables seem less quantifiable, so they usually aren’t included in the models: consequently, climate models don’t capture sociopolitical feedback loops. An example of a feedback loop would be a policy change, which then informs a change in public opinion, which then causes the public to push for more policy change, and so the cycle continues. In a real-world example, this could be the recent change to the United Kingdom’s Highway Code which puts a road-use hierarchy in place. This makes cycling safer and more appealing, and will likely pave the way for additional policies that promote cycling over cars. 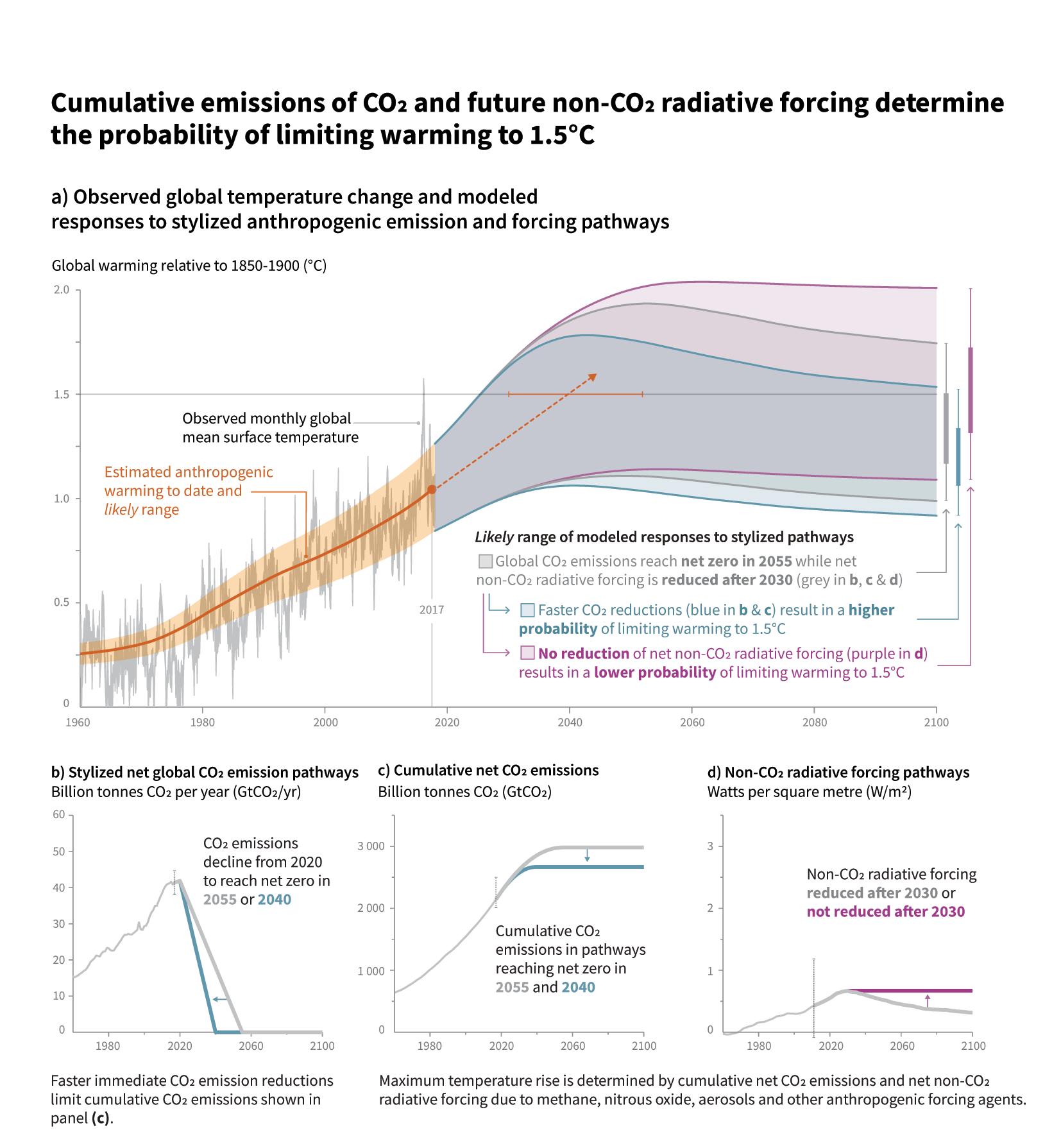 Climate models assume that the goal is to inform policy direction, in order to mitigate climate change, and policy and social factors are treated as external factors. However, in a landmark study by Frances Moore and colleagues, human behaviour and social feedback loops are treated as key variables in climate outcomes and so provide new climate model insights.

Frances Moore is an Assistant Professor in the Department of Environmental Science and Policy at UC Davis. In her paper, “Determinants of emissions pathways in the coupled climate–social system”, sociopolitical processes are incorporated into a novel climate model. Moore and her colleagues use their stylized climate–social system model to stimulate 100,000 possible emission trajectories and future policy. In their model, social factors, such as public perceptions of climate change, the cost and efficacy of mitigation technologies, and the policy of political institutions emerge as critical variables in explaining variation in emissions pathways. Traditionally, in climate models, sociopolitical variables are treated as exogenous, appearing as constraints on the model. Whereas within Moore’s model, these variables are endogenous, which can be affected and affect in return, inside the model. This creates a feedback loop, which guides emissions trajectories.

The paper integrates social science into climate analysis, drawing on qualitative disciplines such as legal literature, political sciences, and rich case studies. Turning qualitative data that explores the nuanced social dynamics in social networks, political institutions, power, and information sharing, into mathematical equations is pretty tricky. Sometimes we don’t have the data, and sometimes we do, but only for the last ten years, which is a relatively short time. The researchers used backcasting, in which the climate model is applied to the past, to determine which set of parameter constraints are likely to generate long-term matches which reflect reality.

What does the model predict?

Depending on the sociopolitical variables inputted, the model predicts warming in 2100, ranging between 1.8 °C and 3.6 °C above the 1880–1910 pre-industrial average temperatures. Consequently, the model allows us to understand which parameters, meaning which policy decisions and feedback loops, put us in a world where we get positive, rapid transformation with lower emissions.

Moore’s model is really illuminating and forms part of a wider debate on climate modelling and damage prediction. Variables which are more easily quantifiable are more likely to be included in risk analysis.

The ‘cost of carbon’ model puts a dollar value on the economic cost of emitting one ton of carbon dioxide. Climate change researchers historically have had to put a dollar value on variables to be part of the conversation, but that is harder with untangible items. How can we quantify the value of species, the value of an intact ecosystem, or the value of lost cultural heritage?

Variables that are quantifiable with transparent scientific processes, are more easily defended in court, whereas qualitative data is more open to critique, so can be harder to use within models. Crucially, though, Moore’s model considers that any figure is better than zero. Even if the figure isn’t perfect, it should still be included in the model.

What does this mean for climate science?

Moore’s model paves the way for a new type of climate analysis. The model predicts that, at the current rate, temperatures will rise between 1.8 °C and 3.6 °C. This prediction could rise or fall, depending on carbon capture, climate system uncertainty, carbon cycle feedbacks, and climate sensitivity. 1.8 °C and 3.6 °C of warming would damage society significantly, and the damage would not be distributed equally.

A recent paper concluded that the Paris Agreement is achievable if we stick to our pledges. This, combined with Moore’s groundbreaking climate model, offers an opportunity to deliver faster and more targeted change without having to rely on technological silver bullets.