Are aerosols really bad for the environment?

This month Alectro launches the first installment of its new series: A-Z of Sustainability. We’ll be looking at some important buzzwords and topics in this field, offering insight into some key debates around climate change and the environment.

First up, A, of course. A is for aerosols - you know, like the particles that come out of your deodorant. But what exactly are aerosols?

An aerosol is actually just a suspension of tiny solid particles or liquid droplets in air or another gas.

Aerosols can be natural or man-made.

How do we measure the impact of aerosols?

If you moved to China, one of the habits you might quickly pick up is checking the daily Particulate Matter (PM) Index. Like the weather, the level of air pollution varies from day to day. Too high, and it’s likely you’ll be putting on a mask before heading out (Yes, this was something people did before Covid).

The PM Index doesn’t just measure a single pollutant, but rather a mixture of various harmful chemical aerosols — around 10,000 to be more exact. These vary in size and come from a variety of sources, making their behaviour unpredictable. The Index defines these particles by their diameter:

The WHO has estimated that over 4.2 million people have died this year due to exposure to air pollution. 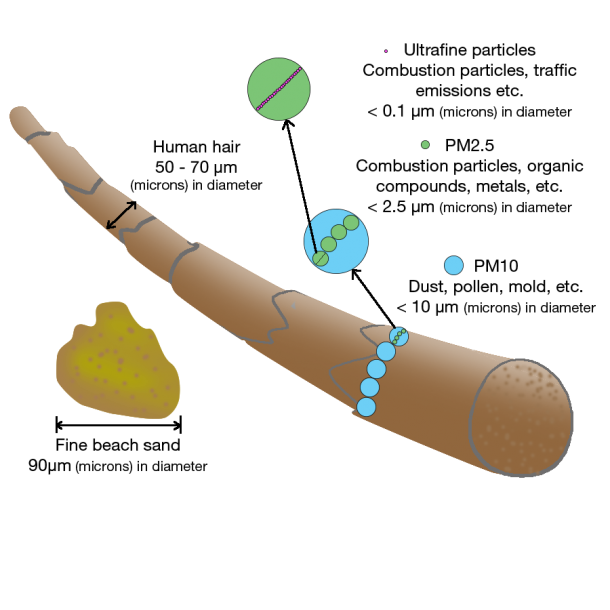 They offer planet-cooling technology – the problem, they are also killing us

Whilst the health effects of air pollution are often talked about, less discussed is how these aerosols can also influence our weather. Black carbon aerosols from bush fires, for example, can suppress cloud formation by warming the air and forcing small water droplets to evaporate, leading to less rain. Sulfate aerosols on the other hand enlarge clouds and as a result, increase the frequency of rainstorms.

Aerosols can also influence our weather

Let’s go back to China: after factory timetables started being regulated in order to keep the PM Index from getting too high for too long, it was noticed that thunderstorms started aligning with the operating schedules.

So where's the catch?

When we speak about climate change we often talk about greenhouse gases capturing the Earth’s heat and warming the planet, but the complex system of aerosols also affects the temperature of our planet - but perhaps not in the way you might imagine. Aerosols reflect more sunlight back to space than they let pass through them, and as a result, they can help cool down the planet and therefore provide a counterweight to global warming. Some natural aerosols like dust, smoke or organic compounds from plants are an integral part of the Earth's climate system and we wouldn’t have any rain without them.

But that's the Devil's deal.. especially for those of us who enjoy going for a run outside and breathing clean air: man-made aerosols, such as those used as propellants in cleaning sprays, hair products and deodorants, linger in the lower parts of the atmosphere and can cause the adverse health effects that the PM Index warns against.

Although many of these dangerous aerosols were banned at the Montreal Protocol, some are still active in our atmosphere.

This vicious circle of positive and negative climate and health contributions continues to baffle scientists and policymakers.

Take aerosols away and temperatures would soar overnight — between 0.5 and 1.1 degrees Celsius.

So an app can remind you to bring your mask before going out on a smoggy day, but a long-term preventative solution is crucial for us and the Earth. Instead of exaggerating the greenhouse gas vs aerosol balancing act, playing one off against the other, we could just cut greenhouse gas emissions.

But you already knew that.

To discuss your own sustainability journey, reach out directly by emailing hello@alectro.io

This article was originally published on LinkedIn: Are aerosols really bad for the environment?